We Have Cover Art! 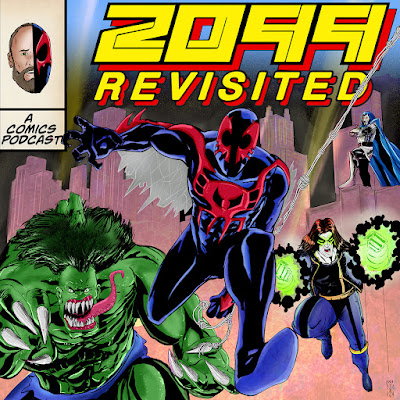 Look at this gorgeous cover art that the amazing Don Cardenas created for this podcast. I am in awe, and in love. I cannot wait to dive back into this universe.

I came to Don with a basic idea for the design for this cover art, as you can see from the pic below: 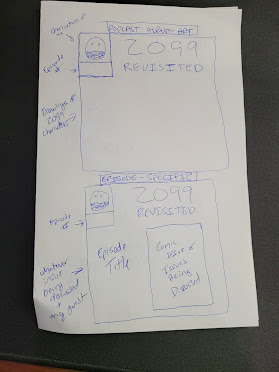 My initial design pitch: "In the corner, my dumb face (like how Marvel used to use characters' faces). Logo next to that, and either a 2099 landscape, or some characters on the main album art. For individual episode art, it would be a template where I could just add the episode number in the corner, and past a pic of the cover of the issue that would be covered, probably with an episode title next to that. "

I didn't even specify which characters should be included--Don is a 2099 fan, so I knew he'd pic some good ones. He totally ran with it from there, sending me a few updates of the art in progress, including this sketch version I adore: 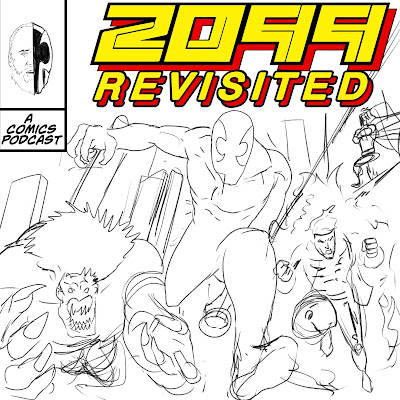 For those that haven't followed my other podcast stuff, Don previously created the cover at for one of the music podcasts I do, Power Chords: 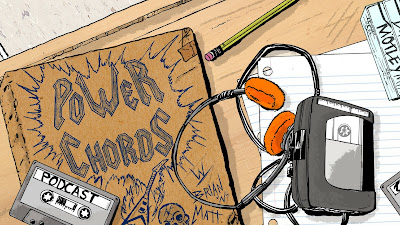 Amazing, right? Don is such a great artist to collaborate with, because not only does he "get" me, but also because I trust his creative vision completely.

Anyway, all of you should go follow Don on Twitter @doncardenasart, and you can see more of his work at doncardenasart.com. I'll be talking to Don on the podcast about the cover art design, as well as his love of the 2099 universe. Stay tuned! 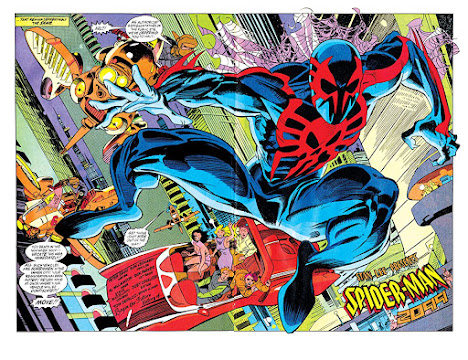 Hi everyone, this is Brian here with a preview of my upcoming podcast project, 2099 Revisited.

Some of you may know me from the Secret Identity podcast, a show I produced for almost 12 years with my co-host Matt Herring. Secret Identity started in 2006, when there were only a handful of comics podcasts, and by the time we wrapped up in late 2017, we had produced more than 800 episodes and 2000 hours of comics and pop culture discussion, interviews, reviews, and more.

Over the past year or so, I’ve been playing around with the idea of doing a comics podcast again, but I didn’t want to re-create Secret Identity. Instead, I wanted to have a tighter focus. I had a lot of ideas about what that focus could be, but it wasn’t until recently that I made my decision. 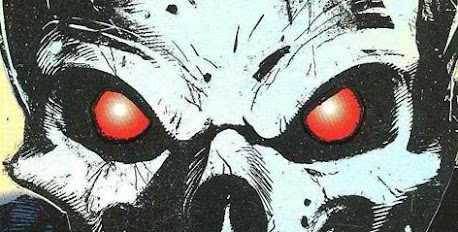 If you listened to Secret Identity at all, you know that one of my all-time favorite characters is Spider-Man 2099, and that I really love the 2099 universe. Back in 1992, Marvel gave readers a look into the future of some of our favorite characters, with the launch of the 2099 universe. It was a cyberpunk dystopia where corporations ruled and the heroes of the age of heroes is just a myth. A new group of heroes begins to rise up, starting with Miguel O’Hara, Spider-Man 2099. The line started with Spidey, Doom, The Punisher, and a new character called Ravage, and then expanded to include the X-Men, the Hulk, Ghost Rider and more. When the line wrapped up with a one-shot in 1998, it had spanned over 250 issues in total, and featured some incredible storylines that a lot of people have never really gotten to experience.

And that is what this podcast will be about.

The revival of Spidey 2099 and his inclusion in the mainstream Marvel universe over the past several years has been a joy to see for me.

When Miguel and Lyla were teased at the end of Into the Spider-Verse, I actually got teary-eyed in the theater. But it was the new trailer for the Spider-Man: Across the Spider-Verse that really sealed the deal of what I wanted this next podcast project to be.

It seems that Spider-Man 2099 will be a main character in this movie, and I am hoping that the increased exposure will lead people to want to dig deeper into the 2099 universe, because there is a ton to explore.

So for those of you who aren’t familiar, or never paid attention to the line, here’s a quick overview.

To celebrate the 30th anniversary of that universe in 2022, I’m going to take a trip back to the future, and revisit all of the 2099 comics from the initial run. From 1992’s Spider-Man 2099 #1, through 1998’s 2099: Manifest Destiny, every series, and every issue will be explored. Get ready for Doom, Hulk, Ravage, Punisher, X-Men, X-Nation, Ghost Rider, Fantastic Four, and more.

The podcast is going to launch in January, and the first official episode will be on Spider-Man 2099 #1. Each subsequent episode will feature one or more issues, and I’ll be following the suggested reading order, so we’ll be jumping between books, and covering crossover arcs in order.

A lot of the time it’s just going to be me, but I will be pulling in guest co-hosts for particular issues and arcs, and I may even feature an interview or two along the way. I’ll also do a few special episodes on things like Spider-Man 2099’s video game appearances, and maybe a few of his more recent appearances in the Marvel universe.

But really, this is going to be a celebration and look back at the entire 1990s line of 2099 books.

So mark your calendars, because in 2022, we’re headed for the World of Tomorrow.